by Jack on December 21, 2016 in hearing protection 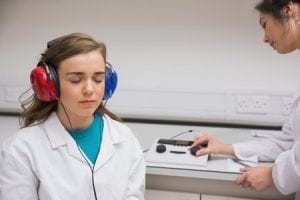 This type of hearing loss often begins in people’s teenage years, and progresses throughout the course of their adult lives.

Likewise, the best way to stop this type of hearing loss is to detect it early in life and take steps to avoid behaviors that could do further damage to a person’s hearing in the future. Unfortunately, it’s notoriously difficult to detect the early stages of hearing loss in young people because conventional hearing tests only cover frequencies up to 4000 Hz. Noise-induced hearing loss typically starts by affecting very high frequencies above this threshold. That’s why audiologists and pediatricians want to start performing hearing tests on adolescents that cover frequencies up to 8000 Hz.

Recently, audiologists at Bloomsburg University and the Penn State College of Nursing collaborated to administer these new and improved tests to 134 high school juniors.

Upon analyzing the results of the test, the audiologists found that the 8000 Hz hearing test was 20 percent more sensitive than the standard 4000 Hz test.

In this case, sensitivity is a measure of how effective the test is at identifying hearing loss. For the purposes of the audiologists’ research, improved test sensitivity equates to improved hearing loss diagnosis in adolescent subjects.

In light of their findings, the audiologists are urging the American Academy of Pediatrics to alter their testing protocols to include higher frequencies in hearing tests on adolescents. If the 8000 Hz test becomes the new standard, it could allow doctors to diagnose hearing loss earlier in life, and subsequently prevent further hearing damage in the future.