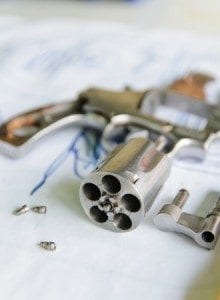 Firing a gun is simple enough. You point, aim and squeeze the trigger, the gun fires and you ideally hit your target. Then you repeat. But how does this piece of machinery allow you to achieve that final step, exactly?

What exactly happens between your squeezing the trigger and the bullet firing into your target?

The revolver is a pretty simple piece of combustion machinery originally conceived of in the mid-19th century. The first concept allowing the shooter to fire repeatedly without having to reload, the revolver was considered a revolutionary concept at the time. Moving away from what were essentially miniature, one-shot cannons ignited with percussion caps, gun owners were ready for something a little more cutting edge.

The handgun revolver concept was not brand new when the forward-thinking Sam Colt drummed up the design, but it was the best. Many ‘repeating weapons’ were conceived prior to the Colt revolver, but they were much too large and complicated to find favor with the American public.

Colt refined, simplified and shrunk the repeating weapon concept a few thinkers before him attempted to mass produce.

Portable, simple and easy to use, the latest design quickly caught on as demand skyrocketed by the middle of the 1800’s.

The inspiration for the first handgun, according to Colt, was the nautical capstan design. A sailor by profession, Sam Colt found inspiration in these cylindrical barrels used to distribute degrees of force to ship sheets and anchor chains. And these barrels greatly influenced the reason we have the gun design we enjoy today.

This barrel housed 6 chambers to house ammunition, which are self-contained explosives. The four components to a bullet in addition to the slug itself include the propellant (gun powder), the rim (extractor), the primer and the case- or jacket- which holds the entire unit together. These are loaded into the aforementioned barrel chambers individually. Now applying explosive pressure behind the projectile is needed to force it down the barrel, the driving principle to every firearm available today.

This is where the trigger-hammer is important. When squeezed, the trigger forces down the hammer. The hammer then strikes the firing pin with spring force, directly striking the bullet primer on the ammunition round in the chamber. As soon as the primer is compressed, a chain reaction is set off, igniting the gun powder in the bullet casing to extract the slug from the cylinder and down the gun barrel. The ratchet then turns the cylinder, aligning the next live round of ammunition with the firing pin.

Now you know how a revolver works, it is imperative you know never to place your hand anywhere the forcing cone in front of the cylinder when firing. This can at the least severely burn your hand and at the very most blow your proximate fingers clean off. This is because, unlike enclosed pistols, revolvers are very external.

All the moving parts on a revolver, such as the firing pin and chamber cylinder, are visible.

This allows for faster cooling but at the same time requires an extra degree of caution. And though you should exercise the same degree of caution regardless of the caliber, understand the more powerful the gun, the larger degree of injury you are subject to. Whereas firing a .22 target pistol is sure to leave a burn, a .50 Desert Eagle will dismember.