Keeping up with the Hearing Protection Act 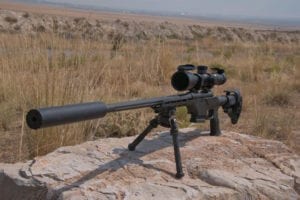 The Hearing Protection Act, introduced in House on Jan. 9, 2017, is a bill to provide that silencers be treated the same as long guns.  Representatives Jeff Duncan [R-SC] and John Carter [R-TX] introduced the bill with 43 original cosponsors, and that number has grown to 141 currently [according to Congress.gov].  Despite gaining traction and making great progress, there is still a long and bumpy road ahead to get this bill passed.  This bill is actually a reintroduction of H.R.3799 – Hearing Protection Act of 2015, which was introduced by Representative Matt Salmon [R-AZ], but never made it past the 114th Congress.

For the sake of brevity, here is an oversimplification of the main arguments for and against this bill:

Against: Criminals will have easier access to suppressors and will employ suppressors in their criminal activities, which poses a threat to law enforcement and society at large.

For: Criminals are going to do what they want anyways, if said criminal really wanted a suppressor he could go to any Home Depot and make one of his own.  The threat of criminal activity pales in comparison to the benefits of noise pollution reduction, and reducing the hearing loss that plagues a vast majority of shooting sports enthusiasts.

In an interview with SilencerCo last September, Donald Trump Jr. said, “I’ve had the privilege of being able to hunt in Europe, where some of the strictest gun laws in the world exist.  And guess what, virtually every hunting gun there is suppressed.  It’s about safety.  If you have that kind of noise levels in any kind of industry, like you do shooting sports, OSHA would be going crazy.  It’s about safety.”  Many hunters choose not to wear ear protection for shooting because they don’t want to sacrifice their ability to hear in the backcountry while stalking prey.  To that same point, considering the use of a firearm in a self-defense scenario, it would be difficult to imagine there would be time to use hearing protection.

Lets use some military statistics to put this problem into context.  Hearing loss from gunfire is the number one most common injury for soldiers, according to the U.S. Army Center for Health Promotion and Preventative Medicine. The Department of Veteran Affairs says hearing damage takes the top disability claim by returning vets; 60% of veterans returning from Afghanistan and Iraq suffer from hearing loss, which amounted to $1.1 billion in disability payments.  Hearing loss from gunfire is a real and widespread problem.

Due largely to Hollywood’s inaccurate portrayal of suppressors, the common misconception that a suppressor will render gunfire silent has continuously plagued this effort.  A suppressor traps expanding gasses from gunfire and allows them to slowly cool at the muzzle; therefore, it is best described as being a “muffler” rather than a “silencer”.  On the subject of misconceptions, here is another one that should be addressed: Using a suppressor eliminates the need for other hearing protection.  Wrong.  Suppressors reduce the noise of a gun blast by roughly 20-30 decibels, on average.  ESP’s technology gives you the ability to remain protected from harmful sounds without sacrificing the non-damaging sounds around you that provide valuable sound clues in any shooting situation.  So, if you enjoy your hearing, using a suppressor in conjunction with your ESP’s is the best choice.

Thank you for reading and sharing.  We will keep you updated on the Hearing Protection Act as it progresses. Subscribe to the ESP Newsletter below.