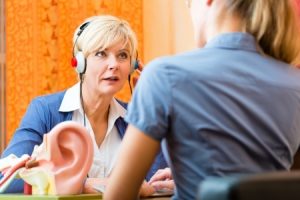 In light of the startling realization that more than 1 billion people worldwide are at risk of developing hearing loss, scientists at a number of research institutions are working overtime to find a way to reverse the effects of hearing damage. Cochlear implants have come a long way in recent years, but they’re not without their drawbacks. Because they bypass the body’s normal hearing process, these implants effectively mimic hearing rather than restore it. People with cochlear implants often find that voices sound “robotic” and have trouble listening to music. They’re also not ideal solutions for people who have some hearing loss, but are not entirely deaf.

A much better solution to hearing loss would be to find a way to regrow the hair cells in the inner ear that allow us to detect sound in the first place. Most people who suffer from progressive hearing loss do so because some or all of these hair cells were destroyed by loud noises. While some animals like fish and birds are capable of regrowing these cells naturally, humans aren’t so lucky. Once the hair cells in our inner ears are destroyed, they’re gone forever.

If the scientists working on a new gene therapy technique are successful, however, that might be about to change.

Currently, Swedish pharmaceutical company Novartis is sponsoring a series of clinical trials designed to test the technique on human subjects. As of December, 2015, eight patients had been selected to participate in the trials. The trials are being conducted by scientists at Kentucky University, Columbia University and the John Hopkins School of Medicine. Preliminary trials on mice successfully restored partial hearing in the animals. Now, the human participants in the clinical trials are starting to notice improvements in their hearing as well. Amanda James, a 29 year old participant in the study at the University of Kentucky, has called the results “amazing.”

So how does the new technique work?

The clinical trials focus on a gene called Atoh1 which triggers those all-important hair cells to grow in mammal embryos. Ordinarily, this gene is permanently “turned off” once the hair cells finish growing in the prenatal stage of development. In these trials, the scientists are attempting to turn that gene back on and restart the process of hair cell growth.

They start by isolating the Atoh1 gene and implanting it into a benign version of a cold virus that’s able to penetrate support cells in the inner ear and deliver the virus. Next, a small incision is made in the eardrum and a laser is used to drill an even smaller hole in the bone that rests against the inner ear. Then the scientists use a syringe to inject the gene-carrying virus into the inner ear.

Thus far the results of the trials have been promising, but the scientists haven’t been able to completely restore hearing in any of the test subjects. Speech comprehension in particular continues to be challenging for the participants in the study. At this stage, the scientists hope hope to be able to restore enough hearing to make hearing aids a viable option.

It might not be a perfect solution yet, but the fact that the technique is working at all has got the researchers and their patients pretty excited.

By identifying other genes that play a part in the cell growth process, they may be able to develop a more sophisticated technique that can restore hearing to an even greater degree. This particular technique is aimed at patients who have lost their hearing to damage from loud sounds or drug toxicity, but a similar gene therapy technique designed to treat people with genetic hearing loss is currently being tested on animals as well.

“What we’re doing is really trying to fix cells that are broken,” said otolaryngologist Jeffrey Holt in an interview with PRI. “These are the sensory cells that are not functioning properly. And if we can introduce the correct DNA sequence, we can make those cells functional again. We’ve demonstrated that with one gene in particular, and it works quite well for that gene. Now we’re trying to tackle some other forms of genetic deafness.”

It’s impossible to say how long it will take for science to perfect these revolutionary new gene therapy techniques, but it’s pretty remarkable how far they’ve come already. After all, these therapies were nothing more than theories until very recently. Within our lifetimes we may well see scientists cure a variety of debilitating conditions thanks to this new avenue of research.