by Jack on September 9, 2016 in hearing protection 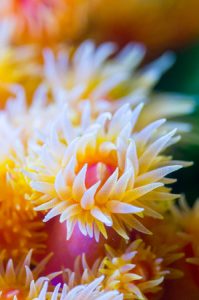 The bottom of the ocean might be the last place you’d think to look for a cure to human hearing loss, but that’s exactly where the authors of a report published in the Journal of Experimental Biology hope to find one.

The idea was born as the biologists studied the remarkable ability of sea anemones to regenerate body parts. They’re able to do so thanks to repair proteins that are secreted when anemones are damaged. Humans, unfortunately, aren’t able to produce these kinds of proteins and therefore don’t have the same regenerative capabilities as sea anemones.

The scientists noticed that anemones are covered with tiny hair-like cells that closely resemble the hair cells in human ears that allow us to hear. People lose their ability to hear when these cells are destroyed by loud noises or certain illnesses and medications.

But what if we could regrow them by harnessing the power of the anemone’s regenerative proteins?

The scientists set out to test this hypothesis on intentionally-damaged mice cells. After incubating the cells for an hour in a culture enriched with anemone proteins, the biologists found that the hair cells had been restored to levels comparable to healthy cells in a control group. During their experiment, the biologists were also able to identify mice proteins that are analogous to, but far less effective than the anemone’s regenerative proteins. By studying the subtle differences between the mammalian and invertebrate proteins, the scientists hope to find a way to enhance the restorative capabilities of the mice cells.

Next, the team of biologists plans to conduct additional experiments on living mice. If the results are as promising as these preliminary tests suggest, the biologists could succeed in restoring the hearing of deafened mice. This could usher in a whole new kind of therapy for hearing loss in humans as well.

Until then, you can count on ESP to provide you with the electronic hearing protectors you need to preserve those all-important hair cells in your ears. Browse our products online, or give us a call today to learn more.