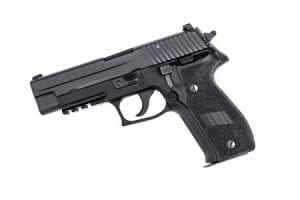 For those of us who devote our entire lives to a sport, there are few achievements greater than breaking a world record. Such is the case for Max Michel, captain of the SIG Sauer professional shooting team and lifelong lover of competitive shooting events. Recently, Michel was able to fulfill a childhood dream by earning a spot in the Guinness Book of World Records for his performance in action-pistol shooting.

“Growing up, I remember seeing the Guinness Book of World Records and wanting to be a part of it,” said Michel in an interview with Ammoland. “To receive its stamp of approval and to be recognized by your peers is one of the biggest honors I could imagine. Now, after finally having the chance to achieve a world record, I consider it to be one of the major highlights in my 25 years of competitive shooting.”

Michel, who has been shooting since the age of 5, has had a lifetime to hone his skills. Over the course of his career, he’s won a number of prestigious world and national titles in a variety of events. Still, his world record-breaking performance holds special significance for Michel because it introduces him to a different audience, particularly his kids.

“For years I’ve been telling them about certain matches, how I performed and what it meant to me, but to see their reaction when I showed them the certificate from Guinness was truly unbelievable,” Michel said in his interview.

The event that earned Michel his world record was an action-pistol drill in which he attempted to hit six target plates with a 9mm handgun as fast as he could. The plates were each eight inches in diameter, and Michel shot from seven meters away. He was given three attempts to break the record under the supervision of a Guinness World Records judge and two timekeepers.

To say that’s fast would be a bit of an understatement. In fact, Michel absolutely crushed his goal of shooting all six targets in 2.5 seconds. Want to see the record-breaking performance for yourself? Check out the video below from RecoilTV!